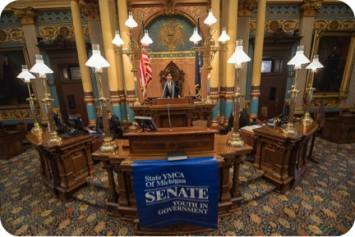 The House of Representatives, comprised of 110 members, and the Senate, 38 members, make up the legislature.

Senators and Representatives are concerned with the passage of legislation. They are voting members of various committees, and certain members act as Committee Chairpersons. Legislators are expected to be well-versed in the pros and cons of the legislation they will consider so that they can exercise their vote in an intelligent and far-sighted manner.

Legislators need to be familiar with basic parliamentary procedure, committee procedure, and the rules of the Model Legislature. They should practice speaking before their delegation and should be proficient in answering questions on the bills they have written.

In committee, legislators debate, amend, pass and defeat legislation dealing with the bills assigned to their committee. Legislators are assigned to committees randomly. Committees are made up of both Senators and Representatives.

On the floor of the House and Senate, members debate legislation. Amendments may be made. After debate and summation, the bill is voted on. If passed, bills go on to the other house. If passed from the second house, the bill is sent to the Governor for his/her consideration.

Note: Because of the number of delegates at the Lansing conference, the House and Senate have each been split into four areas, Red, Green, Blue and White. Each legislature is entirely independent of the other. Bills must only pass though one in order to be considered passed.